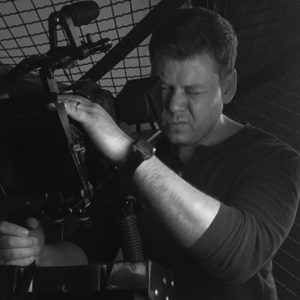 Thomas C. Gaunt is an award-winning filmmaker and screenwriter whose work has been recognized by film festivals and competitions (CineStory, ScreenCraft, Austin, Heartland, Nashville, Nicholl, and Slated) and has aired on television and streaming networks (PBS, El Rey Network, Netflix, PIVOT TV (Participant Media), The Documentary Channel and The Sundance Channel).

The eldest son in a large family, Thomas spent his first ten years in northern Indiana farm country before moving to downtown Indianapolis. This rural/urban duality has informed his writing immeasurably, allowing him to imbue stories with a wide range of characters from diverse socio-economic and cultural backgrounds.  Thomas is also influenced by his parents fostering dozens of special needs children over the years (adopting twelve), all with unique personalities and character traits.  It took a big imagination, artistic ability, and captivating storytelling to stand out in a family so large.  As a result, his talents won him acceptance to the School of The Art Institute of Chicago where he received a BFA in filmmaking. He won a highly coveted internship spending three years learning the craft of documentary filmmaking from Kartmemquin Films (HOOP DREAMS, MINDING THE GAP).  After stints producing a public affairs program for Chicago’s Public Access TV Station (CAN TV) and teaching production classes at a local alternative high school, it wasn’t long before he set out to write and direct his own films.

Drawing from his vast interests and life experiences, Thomas has written many feature screenplays and TV pilots – placing in the Finals, Semifinals, or Quarterfinals of over 35 screenwriting competitions. Most recently, his Sci-fi Adventure Pilot, WORLDS APART, is a 2022 Austin Film Festival Screenwriting Competition Semifinalist (and in the running for the AMC Pilot Award).  His crime thriller THE NIGHT WATCHMAN has been a two-time Quarterfinalist at Austin (2018 and 2022), is currently a Finalist in the 2022 Nashville Film Festival and rated in the Top 1% of all screenplays on Coverfly. Thomas’ social justice heist drama, CIRCLE OF THIEVES, was named a Semifinalist in the 2021 CineStory Foundation Retreat & Fellowship.

Thomas’ first feature documentary A PLACE CALLED HOME: AN ADOPTION STORY, about his parent’s adoption of nine siblings, won a ‘Crystal Heart Award’ at the 2004 Heartland Film Festival and the ‘Audience Award’ for Best Documentary Feature at the Indianapolis International Film Festival before premiering on PBS in 2005.  Thomas went on to write and directed many more shorts and docs including the 2017 short thriller RED MAZE which premiered on Robert Rodriguez’s El Rey Network – winning six festival awards including a ‘Silver Remi’ in the suspense/thriller category at the WorldFest-Houston International Film Festival.  In 2012, Thomas produced, photographed, and edited the PBS Illinois Arts Council-funded documentary ARTISTS IN RESIDENCE, about five aging artist families navigating the rocky path to first-time home ownership. He has also contributed cinematography to the Sundance Channel / Netflix documentary HOWARD ZINN: YOU CAN’T BE NEUTRAL ON A MOVING TRAIN (narrated by Matt Damon) and the Slamdance Film Festival premiering documentary CORRECTIONS about the business of privatizing prisons and profiting from prison labor.